He is Slipping: Reserve Champion Old Fort Days, earnings in excess of $51,000. (ridden by Bo Hill)

A word about Dash for Perks, the paternal sire of Sang Real; as a sire of over $3 million in money earners, Dash for Perks' offspring show speed and sensibility as world class performance horses. I could quote you all the statistics, or you can look them up, but I believe in letting the horses do the talking, so below is a short list of siblings of Sang Real:

MS Perky Bug: Has the honor of setting the world record on the indoor standard pattern at 16.586 on 2/23/2013 at Haras Rapheala in Porto Feliz Sao Paulo, Brazil. MS Perky Bug is out of MS Wahini Bug X Bugs Alive in '75, owned and ridden by Lanita Powers, who also owned and rode a sister, Alive Rocket, the dam of Sang Real. MS Perky Bug was sired by Dash for Perks. Check out her run on UT.

Sang Real (latin term for "Royal Bloodline" is a 2005 Black stallion by Dash for Perks out of Alive Rocket, and own Daughter of

Bugs Alive in '75. This phenomenal cross of amazing bloodlines has produced an amazing stallion that is today producing world class progeny from successfully crossing with mares from all performances. Sang Real broke his maiden on the track in 2007, followed by barrel horse training by the great NFR qualifier and trainer Tammy Fischer. Although he showed promise in the barrel arena, his true love was team roping. He loves the challenge of the cattle and his great strength and power gives him an advantage on large cattle. Sang Real is an Incentive Stallion with PESI, Triple Crown, TQHA, Texas Bred, AQHA Incentive, and the MBNA Challenge. His stallion services began in 2009, and each youngster that hits the ground is showing the beauty and stamina of the parentage that has proven to produce winners. 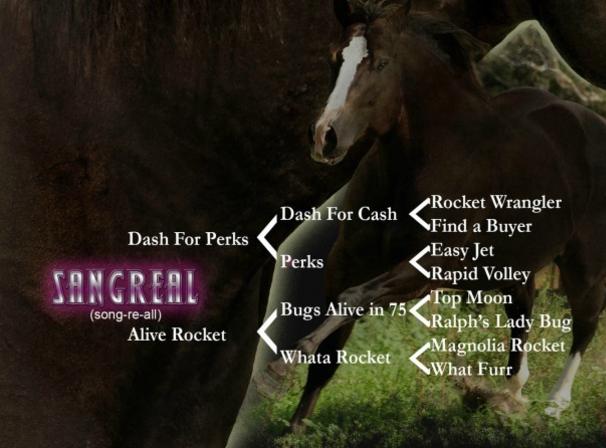